Mr. Greg Quan, a music educator in public schools since 1998, is the artistic director of the choral and orchestra programs at Magee Secondary School in Vancouver BC. He received his Bachelor of Music in Vocal Jazz from Capilano University then went on to complete a Bachelor of Education and a Masters in Music Education at the University of British Columbia.

Believing in creating beauty through sound and teaching life through music, Greg’s never ending goal is to create the best possible musical experience through the teaching of quality literature in a safe and warm environment of respect and joy. His philosophy of helping to foster mindful students through the creation of the “Choir Family” has garnered much positive attention in the media, as articles have been published online and in printed journals and newspapers about how Mr. Quan achieves such a well balanced program and helps to create students who are not only passionate in what they do and who they are, but are also knowledgeable and musically mature beyond their years.

For two years, in 2006 and 2007, he was the regional director for the British Columbia Music Educators Association Honor Vocal Jazz Ensemble, and he is sought after as an adjudicator for festivals and clinician for choral workshops by school groups and organizations such as the BCMEA for their annual conference.

He has also been the director of 2 community choirs in Richmond BC, the VoiceStream Youth Choir (2004-2007) and the Richmond Youth Honour Chamber Choir (2006-2009). And in December 2008, he was commissioned to compose a piece, entitled “Feel the Spirit” for the opening of the first Olympic Venue in Vancouver, the Richmond Olympic Oval, and to perform it with the members of both the Magee Chamber Choir and Richmond Youth Honour Choir.

During the 2010 Winter Olympics, the Magee Chamber Choir was featured in Robson Square in two performances and as well, they were invited to be a part of the massed choir in the Opening Ceremonies of the 2010 Paralympics. Also in 2010, the Magee String Orchestra was honoured to be featured on the recording and in the video of international recording artist K’naan’s song “Wavin’ Flag” for the Young Artists for Haiti project.

In 2011, the Magee Chamber Choir won the Provincials and came second in Canada at the Federation of Canadian Music Festival’s National Festival. They have also produced and released 4 CDs, including a Christmas CD, recorded by Mr. Len Christiansen at Ryerson United Church in Vancouver. They were also fortunate to be invited ,on their European Tour, to sing evening mass at the San Marco Basilica in Venice Italy, the Dom Cathedral in Salzburg Austria, and the Wieskirche in Bavaria Germany, a UNESCO World Heritage Site. Since then, the Magee Chamber Choir has toured in Spain (2013) and then all across England and Scotland (2015) and have been ranked #1 in British Columbia in 2014 and 2015, and ranked #3 in Canada (2015).

In addition, Mr. Quan is in demand as an adjudicator at festivals and is asked frequently by many other choirs, both school and community, to help them through doing choral workshops and clinics. Mr. Quan is also a board member of the BC Choral Federation.

In 2013 Mr Quan and the Magee Chamber Choir was recognized at the Heart and Mind Conference at the Dalia Lama Center for their work in mindfulness education through choral music.

In 2015, Mr. Quan was honoured to be chosen by UBC as one of their Education 100, the top 100 graduates from their education program who make a difference in their communities, joining people such as Justin Trudeau, the Honorable Linda Reid, Rick Hanson, and many other deserving people. And in 2016, Mr. Quan was honoured by Capilano University as he received their 2016 Distinguished Alumni Award. (Please click to see video) 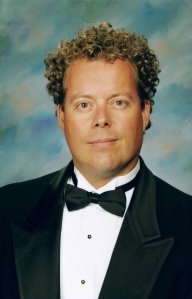 Mr. Chris Haas has been teaching bands at Magee since 1999.  The Magee music program has always maintained a tradition of excellence since its revitalization in the mid 1970s by Mr. Peter Stigings and Mr. John Trepp.  Prior to teaching at Magee, Mr. Haas taught at Gladstone Secondary School where he, along with choral director Ms. Gail Suderman, built the program from one full-time music teacher to two.  In addition to secondary school teaching, Mr. Haas also taught elementary bands at Selkirk, Tyee, Henderson and Begbie elementary schools.  Mr. Haas also taught the junior concert bands at the UBC Summer Music Institute from 2000-2005 and 2009.

Mr. Haas has been performing professionally on drums and percussion instruments for 30 years.  As a freelancer, Mr. Haas has performed all styles of music including rock, jazz, funk, vocal/choral, African, classical, big band, soul, country and blues.  He was a drummer and band leader aboard the Britanis and the Americanis, two Celebrity Cruise liners that traveled the Caribbean.  In Vancouver, Mr. Haas has been actively involved in the Latin-American music scene for 20 years, performing with all of Vancouver’s top Latin/salsa bands including: Rumba Calzada, Tropicana, BC Salsa, La Clave, Xarabanda, Grupo Jazz Tumbao, Zapato Negro, and the incredible all-female, Cuban timba band – D’Talle.  2009 performances with jazz/latin singer Deborah Ledon have included repeat engagements at the River Rock Casino, and a Vancouver Jazz Festival performance that was recorded for CBC radio.

Upcoming Events for Choirs and Orchestra